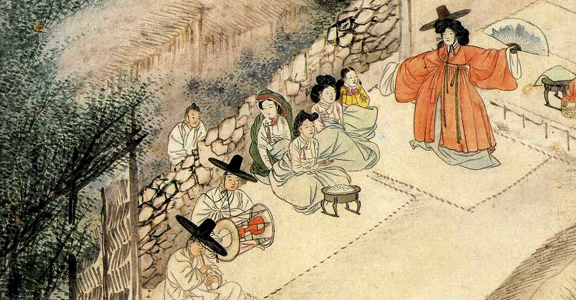 Shamanism is a world-wide religious phenomenon, considered by many anthropologists to be the most ancient and fundamental form of spiritual practice in human life. Although shamanism is not present today in all societies, it can be found in societies at all levels of complexity, and in all parts of the world.

There is a great diversity of forms and practices found in different shamanistic traditions, but there are several universal features that distinguish shamanism in general, and these can all be found in Korean shamanistic practice as well.


Although all shamans function as a channel between the spirit world and the human world, there are two main ways in which this can be done, and consequently anthropologists generally divide shamanism into two main categories, based on how the spirits are channeled: soul-flight shamanism, and possessive shamanism.

In soul-flight shamanism, the shaman enters a trance state and then his soul journeys into the spirit world, where he encounters and interacts with various gods and spirit beings. This is all acted out very dramatically for the benefit of the shaman's client and audience. In the other type, the shaman puts herself into trance state and becomes a channel for different deities or the spirits of deceased individuals, who speak and act through the shaman. In both types the shaman puts on a "good show" for clients and audience.

The Forms and Terminology of Korean Shamanism

The traditional term for shamanism in Korea is Musok (무속, 巫俗) or Musok-Shinang (무속 신앙), although the term Mu﻿gyo (무교, 巫敎), which literally can mean "Shaman Religion", is becoming more popular recently. It might be best not to consider Korean shamanism as a "religion" in the normal sense. It is not so much a coherent system of beliefs as it is a set of practices, often combined with Buddhism with no apparent conflict or contradiction in the minds of its practitioners and participants. As a matter of fact, few people actually consider themselves to be "Shamanists", except perhaps for the shamans themselves. Most Koreans who follow or practice shamanism actually call themselves "Buddhists". Many aspects of Buddhist symbolism can be found in Korean shamanism, and aspects of shamanism have become incorporated into Korean Buddhism; neither one is completely exclusive of the other.

In Korea the vast majority of shamans are women, although there are a few who are men. The most common term for a female shaman in Korea is Mudang (무당, 巫堂), but they themselves tend to prefer the term Manshin (만신, 萬神 - literally "Ten Thousand Spirits"). Male shamans in Korea are generally called Baksu Mudang, or simply  Baksu (박수).

Korean shamanism can be divided into two general categories, depending upon the manner of recruitment. The traditional way in which a person becomes a mudang is by having some mystical experience or suffering a prolonged inexplicable illness, called Shinbyeong (신병, 神病  "spirit sickness"). It is felt that the only way to fully recover from the Shinbyeong is to accept the presence of the spirit and to embrace the path of the mudang. The afflicted individual must find a senior mudang to guide her and initiate her into shaman-hood. This type of mudang is called a Gangshinmu (강신무; 降神巫), and the initiation ceremony is called a Naerimgut (내림굿), in which she fully experiences and learns how to channel her primary possessing spirit (called Momju 몸주, or Momju-shin 몸주신). The Gangshinmu type of mudang can be found throughout the Korean peninsula as well as in the contiguous region of China with an ethnic Korean population, but it is most characteristic of the northern part of the peninsula. The other way in which a person becomes a mudang is through matrilineal inheritance, passing down through the family line, from mother to daughter. This type is known as Seseummu (Seseup-mu 세습무; 世襲巫), and is mainly confined to the regions south of the Han River. The hereditary type of mudang is commonly called a Shimbang﻿ (심방, also 신방 神房), especially in Jeju-do (where there are also more male shamans than in other parts of Korea). ﻿

The primary function of a mudang is the performance of an elaborate ritual called Gut (Kut 굿) in which the mudang will act as the mediator between the spirits and the people. This is sometimes called an "exorcism" ritual, but that is not an appropriate term, and the Gut cannot really be equated with the western Christian concept of exorcism.  A Gut may aim to placate the spirits of the deceased, especially those that have died with unresolved personal problems, but it is NEVER about expelling evil spirits or demons in the Christian sense.

A Gut may be a small affair with a single client or family, or it may be a lengthy performance for the entire community. It may take place in the privacy of someone's home, or at the mudang's own shrine or a shared spirit hall (Shindang, 신당 神堂) , or it may take place in a large public space (if it happens to be a community Gut), or somewhere in a natural setting, especially sacred spots by a mountain stream, a sacred tree, or a trickling spring. The objectives of a Gut can be various. They may aim to bring mental or physical healing to an individual client, to ensure the birth of a son, to reconcile the living with those who have departed, to placate the troubled and restless spirits of those who have died with unresolved problems, to bring blessings and good fortune to a family, a business or a community, to ensure a bountiful harvest for farming communities, or protection at sea for fishing boats.

During the performance of the Gut the mudang will change into different colorful costumes associated with each of the particular deities and spirits who will speak through her. She will also act out the character of those spirits through dance and chanting, and the manipulation of typical shaman instruments such as swords, tridents, cymbals, jingle-bells, and cloth banners.  In the Ssikkim-gut (씻김굿) , performed to placate the souls of the recently deceased and to help usher them into the spirit world, however, the mudang and her attendants typically all wear white, and most of the banners and other items are predominantly white.

Another common type of shamanist ceremony, the simplest do-it-yourself form that does not necessarily require the services of a mudang, is a blessing ceremony called Gosa (고사). This is often performed when someone buys a new car or new truck, for a new business undertaking or opening a new shop, or at the beginning of an important construction project. A Gosa will also usually be performed at the beginning of filming a new movie or TV series, with all the main actors and staff participating.